Yin and Yang the symbols of the duality of nature 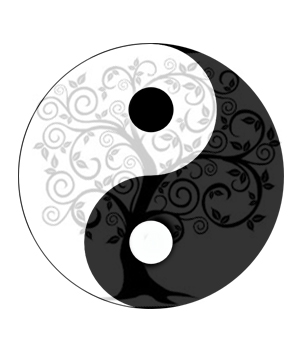 In Chinese philosophy Yin and Yang are the fundamental principle of all things. The key of a good Feng Shui is the balance between Yin and Yang and that creates harmony between the 5 elements. Yang is sun, Yin is moon, Yang is summer, Yin is winter. Time is Yang and space is Yin. Father is light and Yang, while the mother is shade and Yin. This demonstrates that Yin and Yang are in a dualistic relationship. The same system can be applied to the domestic environment: for example, the bedroom where we rest is Yin, the livingroom where guests discuss vividly is Yang.

The Feng Shui wants to balance the two energies Yin and Yang and bring all things surrounding the person in your environment, then studying the best spread of the rooms, the furniture, shapes, materials, colors ect...
Yin and Yang are always to be considered in relate to one another and not in an absolute way. The ocean water still must be considered such as Yin, but if a storm comes and they get up the waves will become a water Yang.